In the current situation, with the enormous impact of the Corona measures on our day to day lives, many things are uncertain. Organisations are trying to pivot their business to match the changes society and customers are experiencing. It is difficult to plan ahead and anticipate the (near) future. In the meanwhile budgets are being cut, commercials are being pulled from air time and product launches are temporarily on hold. Investments are carefully chosen and there is a lot of debate about the right timing. Timing is also a relevant issue with regard to research projects. Say your organisation has been preparing for making changes to the strategy, products and services, distribution or customer service and you want to collect input / feedback from your target group. How do you decide whether you can approach (potential) customers with questions right now or whether it might be better to postpone your research?

In this blog we will outline how the Change Curve can be used for determining the best timing for research projects.

The changing mindset when dealing with the Corona crisis

Based on the latest developments we can at least be certain that our society will not go back to the pre-Corona normal for an considerable period of time. In the beginning of March the mindset in the Netherlands was very different. The general assumption was that the disruption of our day to day lives would only last a short period of time; and that we would be able to go back to normal after a couple of weeks of lockdown. At the time of writing this blog we are halfway through April and we have come to realise that this is not the case. Instead, we need to figure out what the new normal will look like and how to alter our lives and businesses accordingly.

In order to understand the change in mindset that accompanies the developments around the Corona-crisis, we can make use of the Change Curve. This model was developed by psychiater Elisabeth Kubler-Ross in 1969 to describe the emotional phases experienced by someone who has lost a loved-one. Even though this model was based on the subject of grievance, it also holds true in other situations entailing big changes that lie outside our span of control. For example: disability, financial problems, organizational changes or major societal changes, like the ones we are experiencing now. 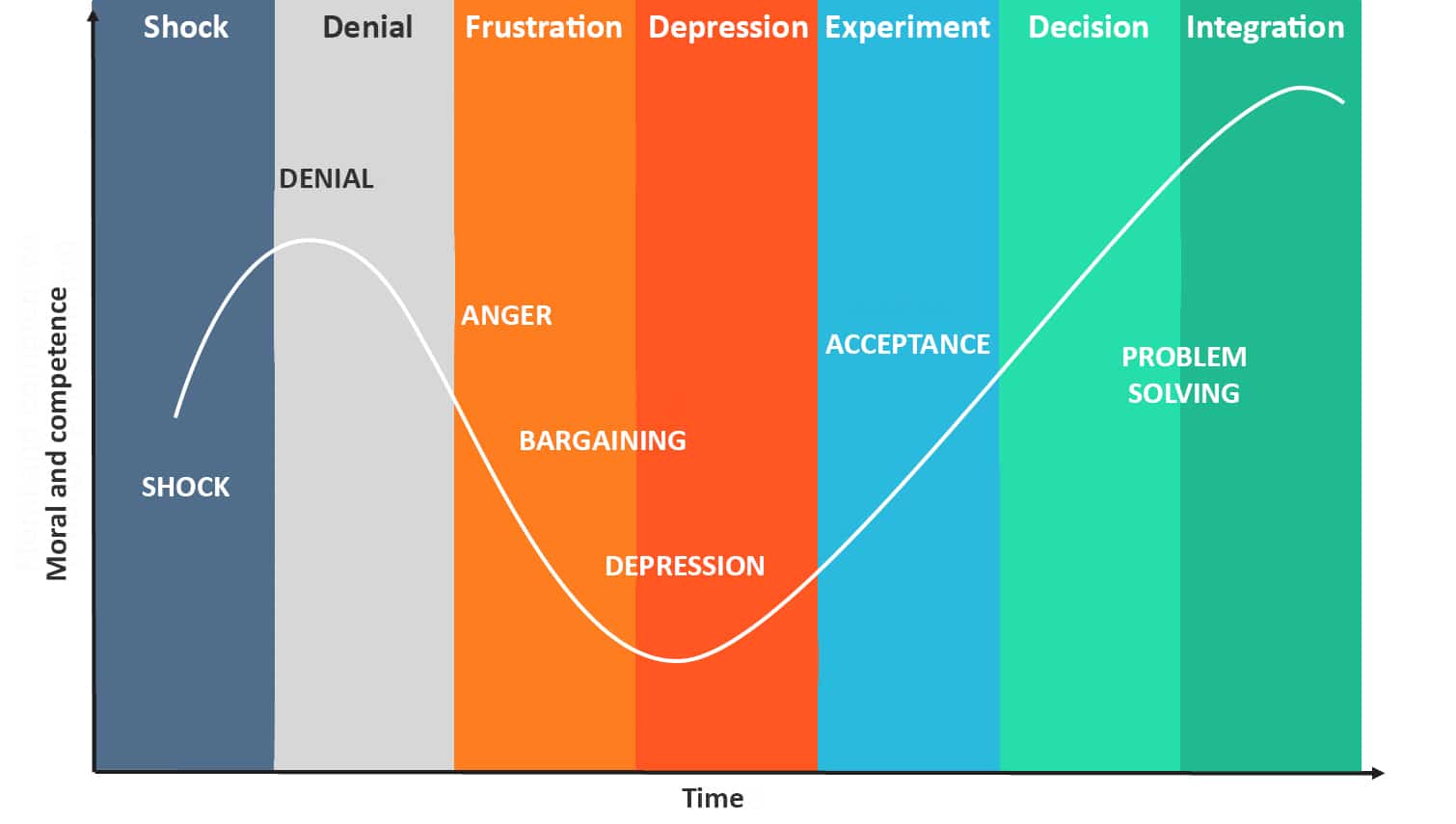 In the Netherlands the shock came in February, when the discovery of the first patient infected with the Corona-virus in the Netherlands, was reported live in a TV-special about the virus. Where we might have been under the impression that the outbreak of the virus was an issue that would not affect our country, we were confronted with information indicating otherwise.

After that we moved towards the stage of denial, with a majority of people tempering the fear for infection by stating “it’s just the flu” and “more people die of the normal flu”. It is just one or a few cases. We can handle this.

Frustration came quickly when the virus started to spread with an exponential speed and the government started announcing measure after measure in an attempt to contain the virus. People were all of a sudden forced into unvoluntary behavioural change. In a matter of days we moved from the advise not to shake hands anymore to an advise to stay home entirely as much as possible. The hoarding behaviour that followed this latter advice, is a good example of people trying to have a sense of control in an uncertain situation.

After having dealt with the lockdown measures for a couple of weeks and coming to realise that this will not be over in a matter of weeks, the depression phase kicks in. The first fearfull response resides and people start mourning the pre-Corona lifestyle and habits.

We could say that now, mid April, we are moving slowly towards the end of the depression phase in the Netherlands. We have accepted the behavioural changes and have developed new routines in working from home, home-schooling our children, keeping distance when going outside and when doing groceries with a mandatory sanitized shopping cart. This is for instance underlined by research into employee experiences with working at home by TNO (Dutch Organisation for applied scientific research). In two weeks time people rated their productivity from somewhat less than normal to slightly higher than normal.

Once some of the current lockdown measures will be lifted (on a certain extent) in the coming weeks, we will enter the experiment phase. People start looking forward, instead of backward. Society is moving towards the new normal. Plans are being made on how to safely start up activities in different industries, prioritizing vital professions and rethinking other businesses and sectors. Apart from the fact that we are now facing an economic depression, with huge impacts of its own, we are regaining some grip on the near future. 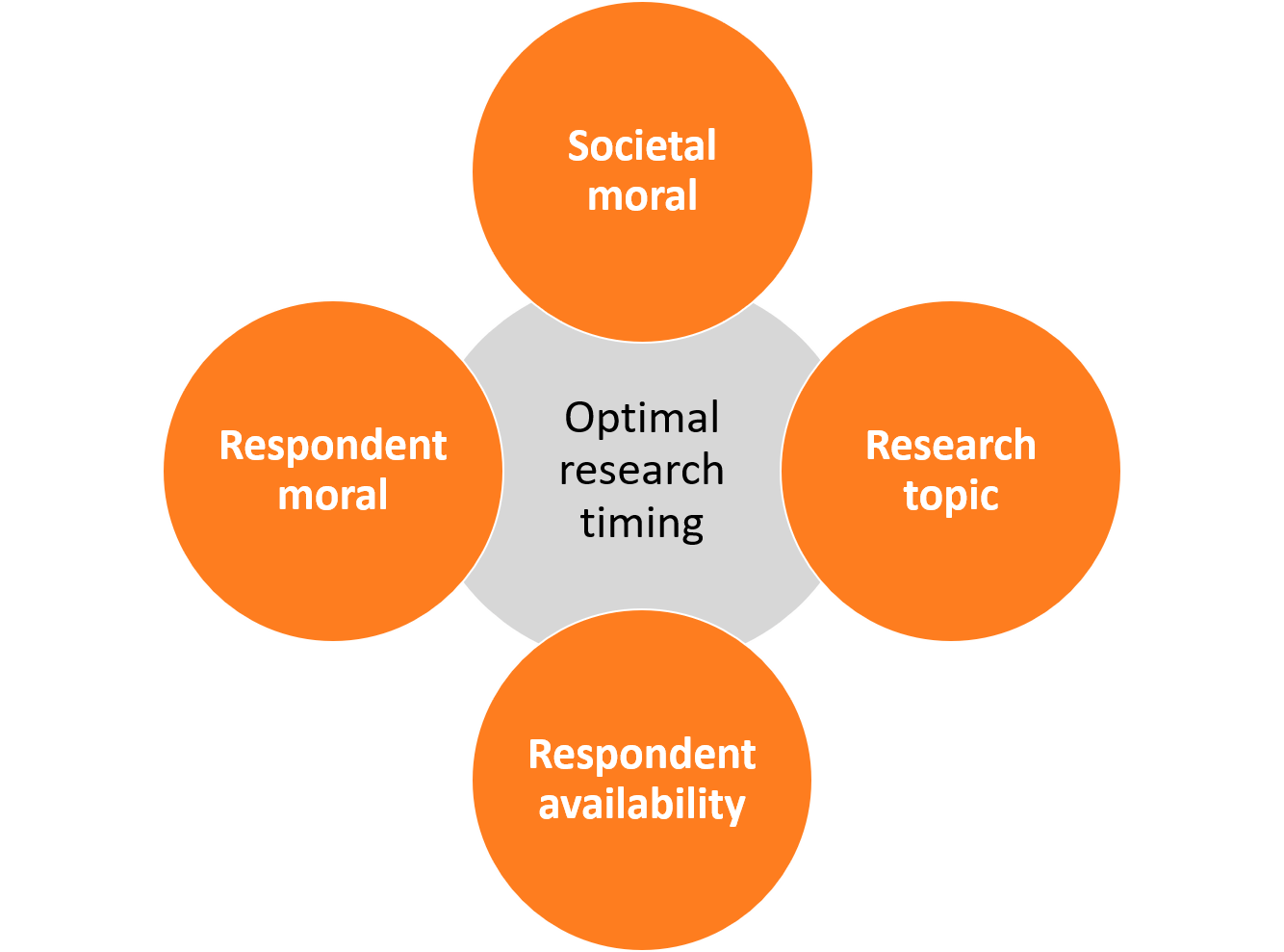 Figure 2: Four factors to consider when deciding on doing research in these “Corona times” (Delta Marktonderzoek, 2020)

From the societal and individual movements along the Change Curve we can derive four factors to consider with regard to the planning and execution of research projects. Do note that we do not question the fact whether or not you will be able to find enough respondents to participate in your study; or whether or not people will feel bothered by a research invitation during the Corona crisis. You probably will find enough respondents and there will be people who perceive a questionnaire as a welcome distraction from other issues. What we are trying to show is how the crisis can impact the relevance and usability of your results and how you can possibly control for these effects.

1) Where is the societal moral on the Change Curve?

Currently, countries are in different phases on the Change Curve. This strongly affects the moral of society as a whole and affects the state of mind of the people and the answers they give in questionnaires. If frustration or depression are at full swing in a country, this will impact the mood of respondents; which will be reflected in the results.

You can either accept this and bear a negativity bias in mind when analysing the results. Or you can decide to postpone the fieldwork until the society you are researching has entered the experiment phase or beyond. With regard to multi-country studies, it is wise to check whether the different countries which are part of your study are all in the same phase. If not, it could be best to execute fieldwork in fases, so your countries are all in the same phase at the time of the measurement.

2) Where is your research topic on the Change Curve?

On all fronts, the future is uncertain. There is still much unknown about the Corona-virus in itself and governments are still figuring out whether it is possible to contain the spread and at the same time safely reduce (some of the) restrictions in order to keep the economy going. It is unclear how long we will have to cope with measures and what the future will hold.

This means respondents can probably form an image of the future, based on today’s circumstances, but are in no way capable of making clear predictions of their future attitudes and behaviour. Maybe now people are saying they will change their travel behaviour; but when the context (travel safety, plane ticket prices) changes back to the pre-Corona situation, they will pick up their old travel habits again.

Even in the pre-Corona time, people were not good at predicting their future behaviour. Because behaviour is always heavily influenced by environment and context, it is difficult for anyone to predict what they would do in a hypothetical, future situation. That is why, when a purchase intention question is posed in research, results will be adjusted in the analysis to correct for faulty predictions. In these uncertain times you can assume that respondents will be even worse in making predictions.

Operational or tactic subjects that are relevant today or in the near future can be studied, but it might be wise to delay strategic studies to a time when there is more clarity about the future.

3) What is the availability of the target group?

Consider the effect of the Corona-crisis on your specific target group and how it influences their (mental) availability. Check if it is possible to generate representative sample of the population. Blauw Research shows that due to the Corona measures 33% of the people experience that they have more spare time, for 57% this is the same and 10% have less time available. It will affect your study when a vast part of/ your entire target group falls in the latter category. For example parents with jobs, who suddenly have to take full-time care of their children and might even have to home-school them, will be busier than usual trying to balance all their activities. This will result in a lower willingness to participate in a survey, which will reflect in the representativeness of the sample. When you choose to accept this effect, you can try to control for it in the analysis, by weighting the results or by bearing in mind the deviation.

4) Where is the respondent on the Change Curve?

This crisis has more impact on some people than on others. For instance, people who have lost a family member or who have lost their job will most likely take longer to get back to a new normal. We recommend adding a few questions to your survey about the moral / state of mind of the respondents with regard to their current situation. This will enable you to determine where they are on the Change Curve and separate those who are still in the frustration / depression phases from the overall research results.

To conclude, hopefully this framework helps you consider the relevant contextual factors before starting up a research project and help you take appropriate action to control them.